OK Google, did you start using Google’s Conversational Search on your smartphone, yet?

Google, the global search powerhouse, introduced the Conversational Search feature at its Annual I/O conference in May 2013, and perhaps gave a glimpse of what future holds for its Chrome users worldwide. It was somewhat implied that the search engine giant was developing this feature for it’s much fawned upon and most anticipated product launch of the year Google Glasses.

The initial response was phenomenal and Chrome users started their dialogue with Google from desktops and notebooks, while smartphone and tablet users had to wait until the service was introduced in November last year. I have been using Google’s conversational search on my phone and believe me, it is just about as much fun as Apple’s Siri.

For starters, one needs to open Google Search and start conversing by saying “Ok Google”, which tells the application that a conversation is about to begin, and the prompt ‘Speak now” appears. Further, it is important to note that this service works best while using a good Wi-Fi or a 3G connection and works horribly with the standard 2G/EDGE network. Personally I use an Airtel 3G and the service was somewhat ok-ish. Let’s see what happens when I gave some challenges to Google’s conversational search feature. 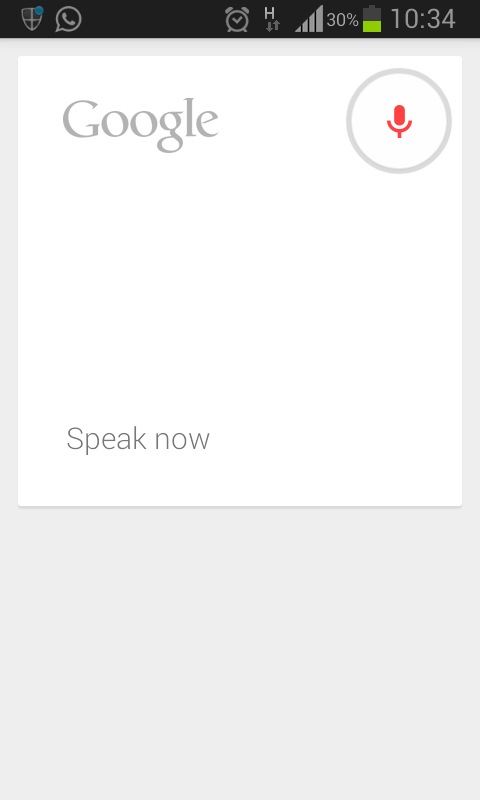 This feature is really simple to use particularly when you tell it to send a text message or call somebody. Each time I asked for something Google gave a voice response (that of a female), which was clear and to the point. For instance, it said “Which Aman did you mean?” and gave a list of guys saved with first name Aman on my phone, when I ordered it to call Aman. Further, when I said “Call Aman Prateek”, Google immediately recognized that I wanted to call a guy named Aman Prateek who was saved as a contact on my phone, and performed the action likewise. I verified the process with Manoj and results were basically the same. 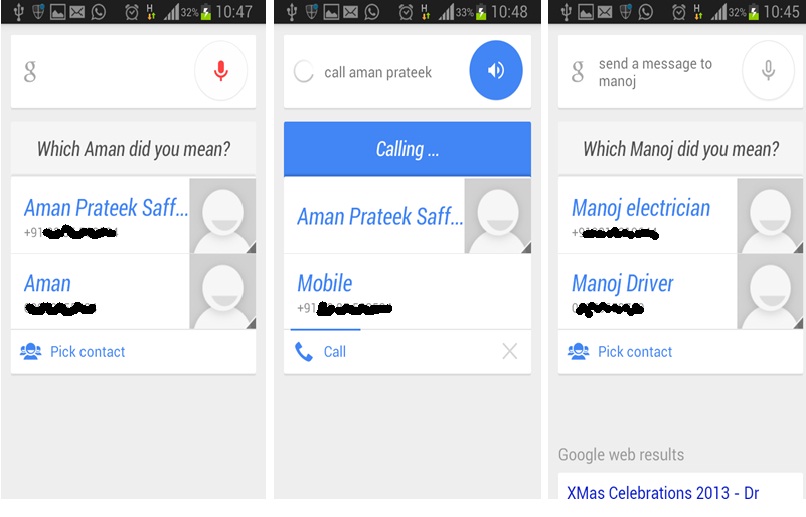 Let’s give some challenges to Google’s Conversational Search feature

Next, I tried a bigger challenge and queried for weather forecast and traffic situation. The response for weather was superior and the search engine instantly recognized my location and gave genuine results. My query was like this,”What is the weather today?”, to which the voice response was something like this, “Today’s forecast for New Delhi is 15 degrees and thunderstorm” along with a week’s forecast as the visual search results. The traffic results were below average and the search results were somewhat old and completely off the track. My query was “What is the traffic situation near Saket?”, to which the Google replied in voice “Showing current traffic for Saket, New Delhi” along with a graphic visual of the traffic scene. Just like the extremely unhelpful visual, the search results comprised old news articles dating back to as old as 2008. 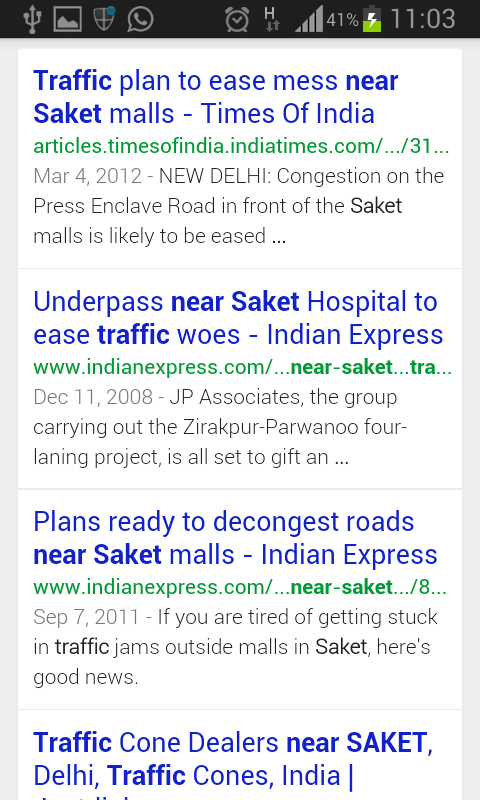 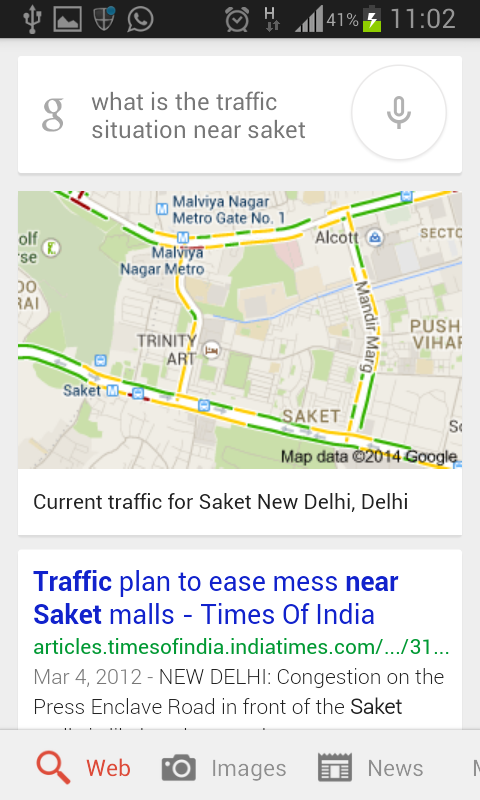 Evidently, generic searches would be used by more users, and perhaps are the biggest area where Google will be looking to excel at. All of my queries for movies, restaurants were aptly responded by the Google’s conversational search feature. Queries such as “good restaurants in New Delhi”, “nice places to visit in New Delhi” and “book a movie show” provided some useful results like “Here is the listing of movie theatres within 20 km.” Since this feature also responds to internal phone queries, I asked it to open bookmyshow, and it replied “Opening web page” and accordingly opened the browser with bookmyshow.com website. 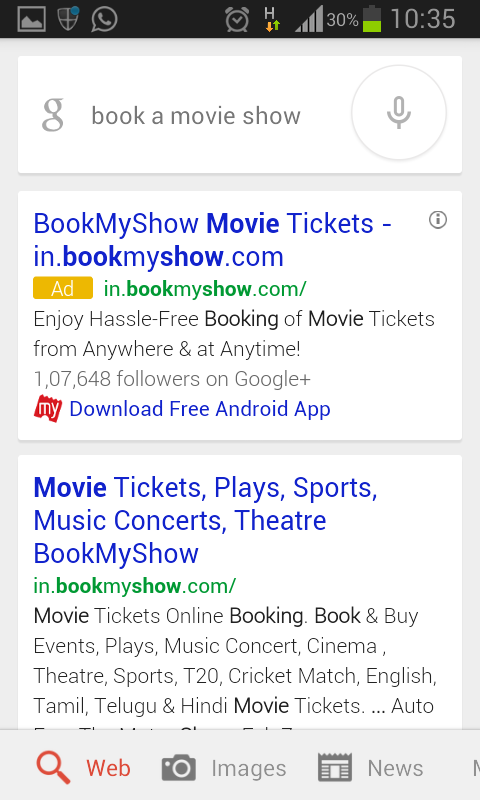 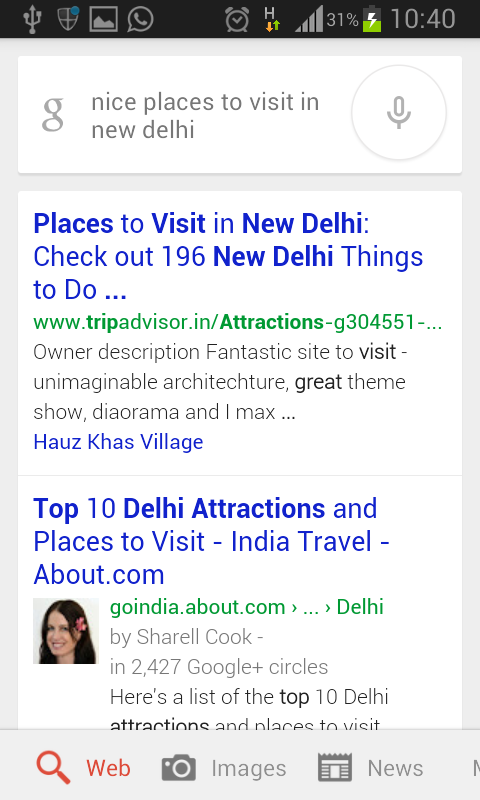 My overall experience was good and could have been better if Google responded more personally and asked me stuff like what I wanted to do, instead. I really enjoyed talking to Google (like a real person) and advise everybody to give it a shot. Experts believe that 2014 is going to be revolution of sorts with Google Glasses and conversational search setting new milestones in the internet industry. Considering Google’s efforts to provide Star Trek computer like experience in conversation, I believe we are in for something special in this regard in the near future.

Copyright © 2019 SEO Company : Search Eccentric
Walkthrough to an effective content strategy for 2014
Probing Matt Cutts’ take on guest blogging as a spammy link building practice
We use cookies to ensure that we give you a great user experience on our website. If you continue to use this site we will assume that we have your permission to use cookies as per our privacy policy. Accept