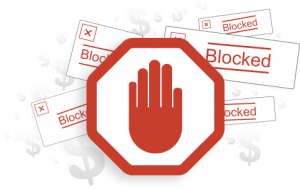 One of the trends that has not received much attention in conversations is the increasing use of ad blocking software. Some of the quick facts that were received from PageFair are:

Even though this technology is not new but still the web seems to have reached its tipping point where frustrated users have decided to jump the technical hurdles in larger numbers to block online ads from bothering them anymore.

What is the reason behind such user behaviours?

User frustrations have stemmed from the fact that many publishers have tried to catch their attention online: pop-ups, pre-roll ads on online videos, invasive ads, and geo and demographic targeted ads. Then there are ads not to speak of that are on-click ads that keep loading and loading with more ad units.

Despite the advertiser’s efforts to use technology to reach the right and targeted audience, many users are bombarded with ads they have no interest in. Moreover, some of the ads consume more bandwidth as compared to the content, the user was trying to access. This in turn means that people are effectively paying for viewing these ads, when they do not want to and potentially slowing down their internet connection. Therefore, it is no surprise that ad blocking softwares are gaining interest.

Apple Inc., that has always been known to position itself at the forefront of user behaviour, recently released its iOS 9 operating system with the capabilities of allowing third-party ad blocking applications to run on its platform for the first time. Some of them are Purify and Crystal– which is a clear indication of where the tech giant sees the trend going.

Is this trend of Ad-blocking gaining interest for good?

Even though this trend users feel is happening for good, there are big drawbacks of using ad-blocking both for users and the advertising industry. This trend damages the viability of websites and the livelihood of advertisers that have ensured that internet remains free. This in turn harms the choices available to the internet users.

Ad blocking not only hurts publishers and advertisers, but also prevents businesses from communicating and competing, reduces the diversity of voices in digital media and hinders the ability of consumers from obtaining important information about products and services.

So this cannot be the way of the future for the industries to make their presence online.

Is there a way to keep both consumers and advertising industry happy?

There are a number of ways many businesses have followed to provide the user satisfaction and not frustrate them:

L.E.A.N stands for Light, Encrypted, Ad choice supported, Non-invasive ads, and aims to establish principles to guide the technical advertising industry standards for global use of digital advertising channels. The programme aims at ad frequency capping, targeting user before but not after a purchase, and the volume of ads that could be served per page.

This will change the way the users feel about ads and will allow publishers and advertisers to generate revenue.

Also known as sponsored content, native advertising is brand content produced in partnership with a publisher that matches their style and voice; with the hope of leading users to your brand. This content can be seen as an ad. One company that noteworthily deserves your attention is netflix. Some marvelous content examples include:

The reason behind Netflix’s native advertising success is that the content blends in seamlessly with the publication’s existing content, while providing the content their audience wants to see and read.

#3. Advertisers need to be organic

While ad blockers are blocking text and shopping ads virtually in SERPs, users are being directed more towards natural search results. Hence, it is inevitable for SEO practices to gain momentum in such scenarios. Organic search space is bound to become more competitive; advertisers can’t afford to not optimize pages for search. This optimization technique extends way beyond meta tags, title tags and H1 tags to optimizing your content for other sections of Google search such as Image searches and video searches, to increase the chances of generating more clicks to your site.

Copyright © 2019 SEO Company : Search Eccentric
5 Reasons You Should Let Your SEO Agency Handle The Content Writing Needs For Your Website
Google Makes Numerous Changes To Results On SERPs
We use cookies to ensure that we give you a great user experience on our website. If you continue to use this site we will assume that we have your permission to use cookies as per our privacy policy. Accept