How India can ascend in the Content Development field in 2015

Digital Marketing has always been a volatile entity. It feeds on flexibility and the ability to adapt to the constant make-overs that the Internet is subject to based on the audience’s behavior. Ever since 2012, when site after site started falling off the grid due to the Google algorithm updates, it became chaotic for the businesses to find a legal route in order to flourish and continue to dominate the internet. This was one of the essential reasons that actually lead to the experts trying to device an alternative, means of marketing.
But now, here in 2015 we are all aware of the importance of quality content and the value of Content Writing and its marketing. Content Outreach, basically revolves around the theory of user engagement; i.e. the number of viewers/shares/traffic is directly proportional to the quality and relativity of the content.

Being from a country that boasts of the World’s second largest population, India, I used to often wonder while surfing the most authoritative of the web vis-a-vis Moz, SearchEngineLand, Marketing Profs etc. that why I don’t get to read or even see much of my fellow Indian native bloggers getting published on globally reputed sites. Apart from a few exceptions like Harsh Agarwal, Amit Bhawani, and a few others who have recently started to show up. I didn’t find many that were worth a mention in the field of blogging and digital writing, let alone Outreach.

So, I delved further into this and after a thorough research I was able to identify few main issues that were holding back this nation and its potential contenders from playing on the global scale.

In order for us to ascend to the top, we need to realize what we do wrong and how we can rectify them. In this article I try to lay emphasis on the areas where we as Indians usually make mistakes on and what we definitely need to do right. I wont be dwelling too deep on the mistakes as I have already posted an article dealing with them.

Where We go Wrong

As I had iterated in another article, the majority of the Indian bloggers and digital pen-smiths have been taking pitch invitations rather too seriously, and pitching for any and every topic at the rate of even 2-3 mails per hour, sometimes completely omitting the relevancy quotient as well!

If someone even gets a successful pitch, then the quality of their article is riddled with so many nuances of grammatical as well as factual errors, that it could literally make Shakespeare roll in his grave.

Here are some of the generic examples:

In this funny yet insightful article some of the most common grammatical errors are observed and pointed out which basically sums up the grammatical side of shortcomings that usually lead to content being shot down on the global scale. 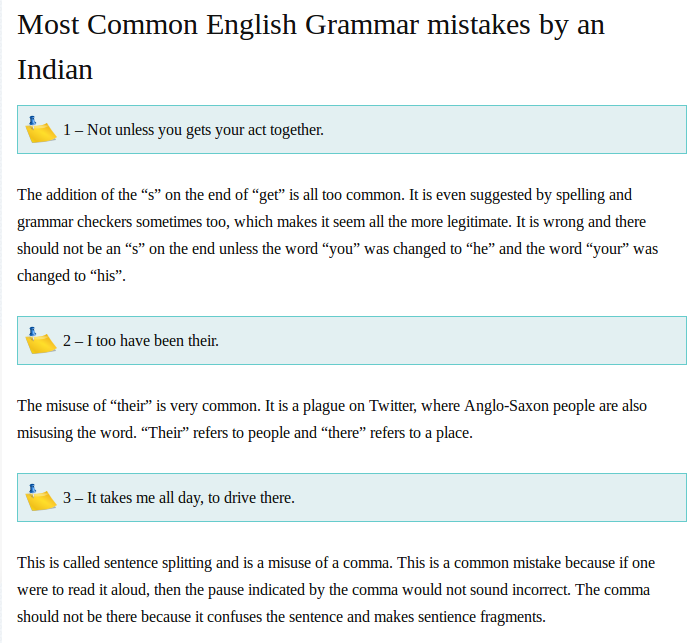 Another reason that I found obstructing the Indian Content writing and outreach from taking its full flight is the orthodox methods and unwillingness to change and come upto date with the norms and guidelines that have been provided in order to promote relevant and organic content on the web.

Despite, the Penguin and Panda change-logs being posted that clearly states its terms of penalties pertaining to Link Farming, Dead Link, or Promotional/unsolicited content techniques, even today many if not most still try to fall back onto these old practices (read malpractices) by either being too obvious or being subtle about it through questionable methods of various sorts, that I have already spoken about in great detail in the earlier post.

“Sometimes the great Indian desperation has its pitfalls as well, and I’m referring to the practice of cold pitching for guest posts, unnecessary dissection of rumored search algorithm parameters, and pathetic outreach attempts and response likewise”

What we must do Right

But, despite everything, all is not lost. With a few altercations, most of the problems can be bypassed and or solved.

Content Outreach is not mere exchange of any type of article in return for traffic or conversion. Audiences do not care about random posts or ramblings that are floating in abundance around the cyberspace.
They are only looking out for quality content that is relevant as well as nicely fleshed out with appropriate graphics and images. The clever integration of images and texts play a key role in the success of the content.

Lets say you have written genuine piece of content that is surely worth its shares in gold. It has all the ingredients necessary for the creation of the ‘ultimate’ piece of content. But, the title is generic or mediocre. The result: your content will fail and disappear in the wide abyss of the internet before you even know it.

People use keywords and phrases in search engines to look for their material. There are tons of results for each phrase and keyword and it is not possible neither feasible that the user goes through each complete article. Hence, Title becomes the key.

In my experience I have come across some hilarious titles that have actually been published online:

“Homeward bound to India? Try something Different this Valentine by gifting a couple exotic touring Packages!”

“GROOM YOUR PUPPY WITHOUT EXTRA EFFORTS”

The examples can go on and on and these aren’t even half as bad! On the other hand there are some good and some great ones as well:

Title has the power to attract audience to even a mediocre piece of content. Guess what people read on newsletters that every good, content-rich site dispatches to their long list of users? So it is of the utmost importance that you need to be serious about your titles. Sometimes a killer title can save a below-par content which would otherwise be lost in the cyberspace without a single view. Also, a poor title can sabotage an entirely great piece of content too. Think about it.

Albeit funny, the Facebook meme page called Grammar Nazi does hold a deep, painful reflection of the present state of linguistic and grammatical errors that we tend to commit in our day to day lives.
If we want to take on the Content Outreach Market on a global scale, then we have to leave behind the pedantic laid-back attitude that we hold for English, being the 2nd language.

In order to take on the global market, that uses English as its primary language, we must learn and enhance our linguistic skills and incorporate them in our writing style as well. Its not difficult, it just takes practice.

It is important not to deviate from topic. As writers, we all understand the lure of the process known as ‘train of thought’. But we can not allow that process to take over our written piece. That would be just like starting a content talking about balloons and ending the content concluding about rats.

However, Metaphors and Allegories are always welcome, if they are used smartly. You can then talk about balloons allegorizing them with zeppelins. But, the key is to be relevant and hold true to the topic.

You can be a laureate and genius when it comes to writing and generating unique, and well fleshed out stories, reports, novels, books, or even articles. But unlike other mediums, Content Marketing involves Blogging and Guest Blogging as its primary tools of the trade.

Writing for blogs or for that matter the internet, is a different ball game all together and it needs a special skill set in order to perform efficiently. Content Marketing, as we all know, thrives on audience viewership and the amount of traffic, the posts generate.

Content Engagement is cited to various factors that govern its quality and intensity such as Title, Structure, Crisp writing style, integration of images and graphics or other relevant visual representations that compliments the written part.

Here is an example of a normal, decent post. (if I may say so)
And here, is an example of an exciting post. Notice the number of user comments and shares that the second post generates as compared to the first. Also, upon reading both of the articles, you can automatically decide the point that I’m trying to make here.

Most writers (if not all), often undergo ‘writers block’; a term coined to state the situation where a writer or an artist finds himself/herself lacking inspiration to create something new. Also, in the field of content development and marketing, there are times when the best pieces of information are already published elsewhere on the internet and you often come to a blank, unable to figure out what topic to generate or what to write upon.

However, even in such a scenario, there is no real need to fret. Just because a piece of information is posted doesn’t mean it has all the available details in it. Even if they are, it still lacks one essential ingredient that can make your content , on the same topic, unique and worth a read. That ingredient is Your personal experience or opinion.

Say you are an iPhone geek and you are aware of everything there is to know. Then you start to generate a topic on it and one fine day, you realize you are out of topics and there is an approaching deadline. In such situation, instead of simply rehashing an already posted information or post online, try to rewrite that same topic giving it personal opinionated approach, where you talk about the same thing, but from your individual experience.

Adding that extra jazz of personal experience can make that post just as original as a new topic all together. This process comes under the popular term ‘Content Curation’.

Unlike grammatical errors, it is always advisable to minimize the usage of adjectives in your content as much as you can. Even though adjectives add to the beautification of your word-weaving, it is simply not required and certainly not appreciated much on the global level.

Infact, many articles fail to see the light of the day just because they have over use of adjectives that affect the interest level of the readers online. Time is money, so make it crisp

Just because we haven’t managed to establish a strong foothold in the global market of Content Outreach, doesn’t mean that we can not or lack the potential. However, certain steps and practices need to be avoided as well as new techniques need to be adopted in order to better equip ourselves to compete against the world.
Sure, the struggle would be fierce, but the victory will be sweet in the end.

Copyright © 2019 SEO Company : Search Eccentric
Being Ethical: The techniques you must avoid to prevent a penalty from Google
Optimizing Tips for Blog Marketing posts on Social Media Platforms
We use cookies to ensure that we give you a great user experience on our website. If you continue to use this site we will assume that we have your permission to use cookies as per our privacy policy. Accept