Google News gets a facelift for tablets (including iPad)

After re-introducing Google Maps for Crapple Apple, Google is doing another favour. They are changing the layout of Google News to suit Apple iPad better. (Hush hush, their main target is the android tablet market, iPad is having a great market share and so they will do a passing favour and brag about it.) Don’t forget they have a hugely popular Nexus series of their own.

The look is quite refreshing, as I checked on a borrowed iPad 2. Not that I use Google news much nor have I ever used an iPad but I have obviously seen screenshots and this new look is way better. Lots of space and much less clutter. The swiping is good too. Horizontal swiping leads you to different sections and there is this excellent “explore in depth” option which brings you more stories on same topic. Being an intermittent news reader, this really helps me to make head and tails of many stories!! 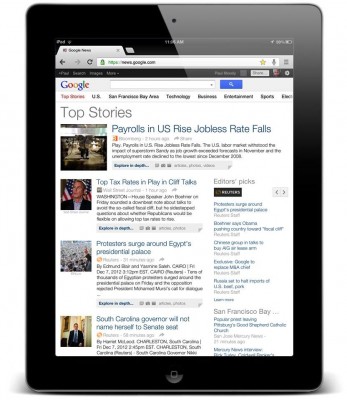 The New Look is Quite refreshing!!

I have been termed a cynic when I am in my most positive mood so here is my question.  Remember, we talked about the tussle between Google and publishers? If the publishers really pull out, Google will have real little news left. There is an old saying, “add much chilly if you are a bad cook” which means people will just complain about the heat, not bad cooking. Much like “the chilly was too much else Faiz had cooked well”

With little news left, Google News needs to have other avenues to attract clients and this improvement is a proactive measure to strengthen their grip on it.  And the eternal target to sell more (tablets) is always there.

Let us know how badly we treated Google, in the comments!!

Shivam Trika
Shivam Trika is a keen learner, fitness enthusiast, self-proclaimed elite gamer and prolific writer writing about the latest in social media marketing, content & inbound marketing. He is an adept marketer having comprehensive understanding of engaging readers and consumers through smart marketing materials.Shivam has helped in building a lot of brands from the ground up and currently leads a team of talented writers who create marketable content for Social Media, Blogs, Images as well as ideate for videos for clients.In his leisure time, Shivam likes to read and watch stuff that inspires him to write thought provoking content and ideas that resonate well with his readers and followers.
Recommended Posts
Recent Posts
Categories
Explore »
Services »
Newsletter »
Contact Us »
We Accept

Copyright © 2019 SEO Company : Search Eccentric
Google or Publishers. Which side are you?
Google Santa Tracker-Best way to wish your loved ones this Xmas
We use cookies to ensure that we give you a great user experience on our website. If you continue to use this site we will assume that we have your permission to use cookies as per our privacy policy. Accept